Microsoft’s HoloLens: Getting things done in a 3D world

Microsoft’s HoloLens: Getting things done in a 3D world 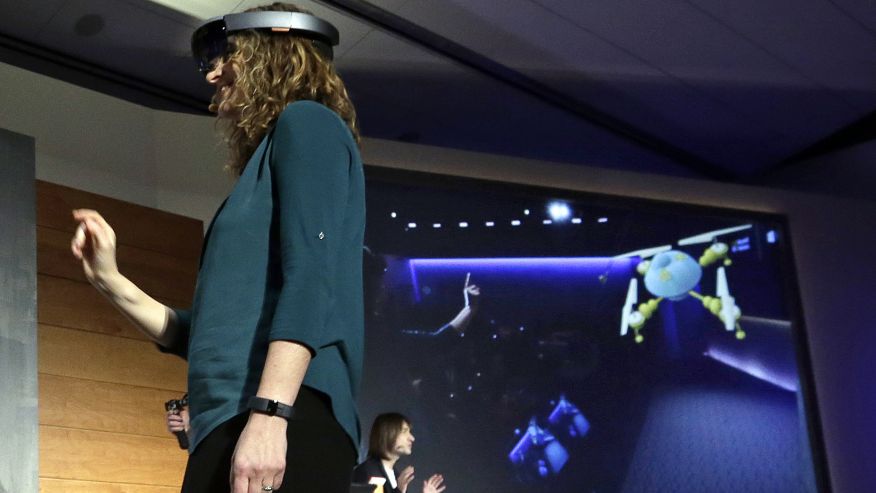 Windows 10 wasn’t the biggest news Microsoft announced this week. It was Windows Holographic, Microsoft’s project to invent the next computing paradigm.

“This is the next PC,” as one developer featured in the Microsoft presentation put it.

On Wednesday, Microsoft was brimming with ideas about how the technology will be used.

Exploring Mars as a hologram, for example.  Or something more practical like house repairs with the help of an “expert” hologram. Or work: “Imagine an architect walking around their designs,” said Alex Kipman, the man responsible for the project at Microsoft, when introducing Windows Holographic.

What is a hologram exactly?  In the movie Star Wars, Obi-Wan Kenobi was represented as a hologram — or a moving three-dimensional representation of a person.

But the best way to understand what all of this means is through HoloLens, the holographic glasses that Microsoft has developed to see a combination of a virtual world and the actual one.

“We’ve invented the most advanced holographic computer the world has ever seen,” Kipman said.

He explained that HoloLens has “see-through” holographic high-definition lenses for interacting with the holograms as you walk through the real world.  It also comes with spatial sound so holograms can be heard “even when they’re behind us.”   And it has advanced sensors to capture information about the surrounding environment.

All of this was crystallized in a demonstration where a “quad copter” (similar to a drone) was built piece by piece from a virtual toolbox.  After donning the HoloLens glasses, all the design work was done in a three-dimensional space by grabbing, inserting, aligning, and tweaking components with the hand.  Then the quad copter was created on a 3D printer and a successful test flight done before the audience.

Think all of this is in the distant future?  It isn’t, according to Microsoft.  HoloLens will be available in the “Windows 10 timeframe,” said Kipman, implying sometime in the next few years.

And key technology has already been integrated into Windows.   Microsoft has been working on Windows Holographic for about five years and has built the technology — referred to as APIs or application programming interfaces — into Windows 10 and the new Windows 10 “universal apps” that run across Windows PCs, tablets, and phones.

“All Windows Universal apps can be made to work with Windows Holographic,” Kipman said.

The crowning achievement so far for HoloLens is cooperation with NASA’s Jet Propulsion Laboratory in Pasadena, Calif.  JPL is working with Microsoft to apply Windows Holographic and HoloLens to the Mars Rover.

“There’s a tool that we’re building with Microsoft to connect scientists and engineers with the environment of the Curiosity Mars Rover,” explained Jeff Norris, JPL OnSight Project Lead, who appeared in a video at the end of the presentation.

“We can’t yet put our scientists physically on Mars [but] technology like this allows us to investigate what’s possible if we can make them virtually present,” he said.