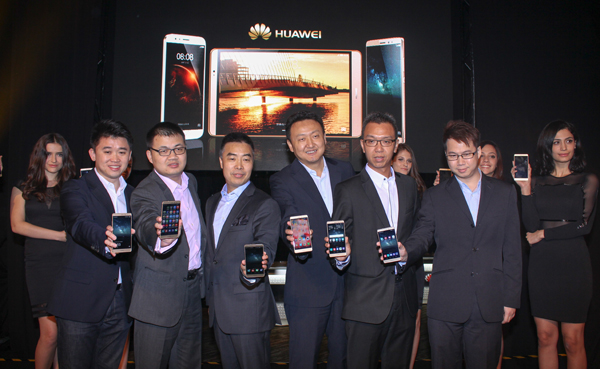 October 28, 2015 2:21 am ByJefri Rahim InHuawei
The Huawei Mate S was officially launched in Malaysia for RM2698 and is available at all major distributors and resellers. While at first we felt like it was just another smartphone launch, you really have to take a closer look at the phone firsthand for the excitement to build. Featuring a gold and coral pink coloured metal body that is both curvy and light, we felt that the Mate S feels thinner and more premium than even the Huawei P8. The full tech specs and features for the Huawei Mate S include the following: While it was initially announced with pressure sensitive Force Touch 2 features, this version for Malaysia maintains it’s touch features with the updated Fingerprint 2.0 and Knuckle Sense 2.0 technologies. Fingerprint 2.0 sees even more integration of the fingerprint sensor on the back allowing it to read fingerprints faster and be used as a rear control for nearly every app. Knuckle Sense 2.0 offers more functions this time around such as the ability to shortcut to an app from any screen with a specific gesture. According to Huawei Malaysia, the Limited Edition Force Touch enabled version is having production issues, so much that it has yet to be released even in China. However, we were able to see one of these Limited Edition Force Touch Mate S smartphones in action, and yes, you can use it to weigh fruit along with a whole bunch of other pressure sensitive functions. However, for those who want to get the normal Huawei Mate S, the first 3000 buyers will get a Mate S Bespoke Royal Selangor VIP Pewter Card along with Huawei’s 2-year premium warranty, 1 year 1-1 exchange warranty, free door-to-door repair pick-up, priority service center perks and 1 year LCD crack warranty.