The brand new OnePlus One is unveiled

The brand new OnePlus One is unveiled

Peter Lau, the CEO of OnePlus, wants to break large smartphone makers’ stranglehold on the market with a new, low-cost smartphone. The OnePlus One offers all the features of devices like the Samsung Galaxy S5 and the HTC One, but at half the cost. Lau’s startup is ambitious, but it faces a grueling uphill climb against established incumbents. 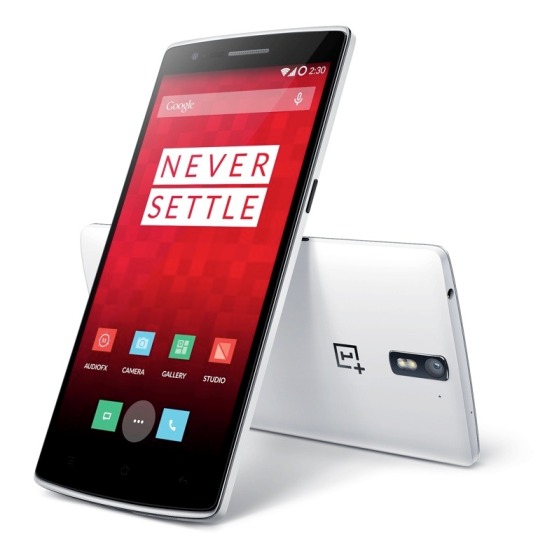 The OnePlus One ships with CyanogenMod, a version of Android 4.4 KitKat that’s been strengthened and modified by the open-source community of the same name. CyanogenMod is very close to a stock version of Android, but it is more secure (e.g., SMS conversations are encrypted) and includes unique features such as Voice Wakeup and on-screen gestures. It looks slightly different, too, thanks to reimagined icons and graphics. OnePlus claims the One will be supported with operating system updates for two years.

In terms of specifications, there’s little surprise. The OnePlus One features the Qualcomm Snapdragon 801 (8974AC) platform with a quad-core 2.5GHz Krait 400 CPU, 3GB of LPDDR3 RAM. The display is a 5.5″ full HD JDI-made, resulting in a pixel density of 401ppi.

OnePlus put a great deal of effort into the design of the One and its hows. The company tried materials such as stainless steel and aluminum for the One, but with a weight of 198g and 175g, respectively, was unacceptable. As a result, the team chose magnesium for the build of the phone and it brings down the weight of the phone to 162 grams. In fact, OnePlus claims this is the lightest 5.5″ smartphone in the world.

The One measures 152.9 x 75.9 x 8.9mm with the edges of the phone measure 4.6mm. At the bottom, there are dual stereo speakers and popular audio company JBL helped for their fine tuning.

At the back, the OnePlus One features a 13 MP Sony IMX214 Sensor with 6 Lenses and f/2.0 Aperture. We already saw it in action in the hands of a professional photographer as well as its 4K video recording skills. The camera is capable of quick shutter speed of 0.3 seconds.

The back cover of the OnePlus One is removable and the company is also launching special StyleSwap covers. Available in bamboo, wood, denim and kevlar, the StyleSwap covers add a dash of personality to the One similarly to the Moto X. Sadly, the 3,100mAh Li-Po battery isn’t user replaceable.

The OnePlus One will launch in Q2 with Austria, Belgium, Canada, Denmark, Finland, France, Germany, Hong Kong, Italy, Netherlands, Portugal, Spain, Sweden, Taiwan, UK and the USA getting it first. More markets are expected to follow suit soon after.