South Korea’s dominant mobile-messaging service, Kakao Corp., and local Internet portal Daum Communications Corps. said Monday they will merge and establish a new company by the end of year in a bid to boost their presence in both web and mobile devices 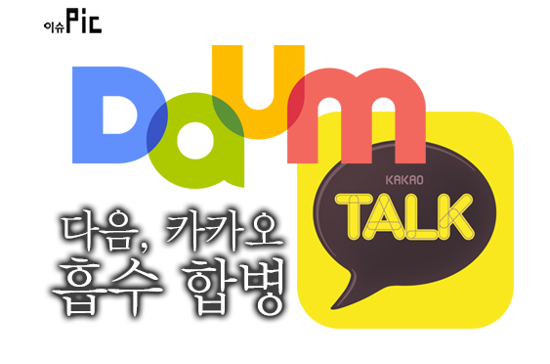 [more…] With the all-stock deal, unlisted Kakao has dropped previous plans for an IPO by 2015 and turned itself into a serious challenger to Naver Corp 035420.KS, the country’s biggest Internet portal operator, which also owns rival mobile messenger operator Line.

The two companies said they had agreed that each Kakao share is worth 113,429 won. Daum will issue 43 million new shares to Kakao shareholders, including 33 million common shares.

“The synergies from the deal are obvious. The deal will give firepower to Kakao to aggressively expand its business here and overseas, while Daum will have a mobile messaging service as its new growth engine,” said Kim Mi-song, an analyst at Hyundai Securities.

Kakao Corp operates South Korea’s dominant mobile messenger service, Kakao Talk and it has some 145 million users globally, although it has been less successful than Line at expanding overseas.

The newly merged company will be called Daum Kakao.