Sony Mobile Communications introduced Xperia™ Z2,which the company claimed as its best ever premium waterproof smartphone combining its best display, sound, camera and camcorder experience as well as an exclusive entertainment offer and a growing ecosystem of companion products. Xperia Z2 is the newest addition to Sony’s premium Z series and will launch globally from March 2014. 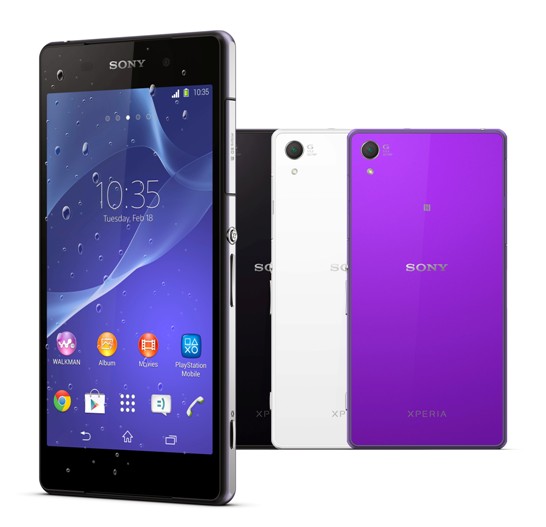 [more…] Sony hasn’t altered much on the design or size of its flagship Android phone for 2014, but rather focused on making notable upgrades on the inside. First and foremost, the company has moved to a new IPS display with what it calls Live Color LEDs, a technology unique to Sony that’s claimed to give its mobile devices the widest color gamut on the market — bettering even Apple’s excellent iPhone and iPad displays.

The Xperia Z2 measures at 5.2 inches, though the resolution remains unchanged at 1920 x 1080, the device gives you slightly more real estate. The Z2 packs a great camera and camcorder in a waterproof smartphone with Sony’s proven camera technologies: Award-winning “G Lens”, 20.7 MP “Exmor RS for mobile” CMOS image sensor and “BIONZ for mobile” image processing engine. It is able to capture video in 4K resolution with SteadyShot™, complemented by new Xperia camera apps such as Timeshift video and new AR effect.

The battery, RAM, and processor have all been upgraded as well: the new flagship comes with 3200mAh of power, 3GB of memory, and a quad-core 2.3GHz Snapdragon 801. Aside from a new set of stereo speakers, the external look of the Xperia Z2 is pretty much unchanged, including an all-glass front and back, IP58-certified waterproofing, and a dedicated camera key.

The Xperia Z2 will be available globally from March with Android 4.4 on board, in the familiar choice of black, white, or purple