Do you still remember how long has PlayStation 3 been launched? It was over 6 years ago! After so long, its successor, PlayStation 4 is finally official. At an event held in the Hammerstein Ballroom in New York’s Manhattan Center, Sony revealed that the PlayStation 4 would go on sale this Christmas. 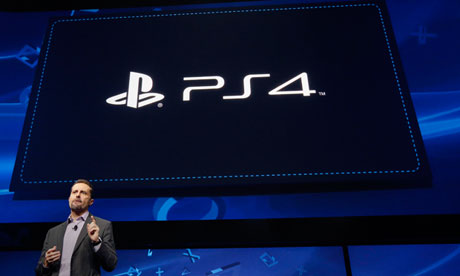 The “highly enhanced PC GPU” packs 18 GCN units – that may sound a like a lot of techy mumbo jumbo but what it essentially means is that the GPU packs 18 processing clusters, each packing up to 64 cores. That provides a lot of parallel processing power, and will thus handle the majority of the PS4’s grunt work. It hits 1.84 TFLOPS of processing mojo.[more…]

Sony announced at the NYC event that the console will use GPU compute features to take advantage of this components raw power – it’ll be used for general computation tasks as well as building graphics.

The PS4 will ship packing 8GB of GDDR5 memory.

Indeed, Sony has revealed that you will be able to power down the PS4 mid-game and then switch it on again in seconds and pick up right where you left off. That’s the sort of loading power that this memory enables.

Sony said the cameras (amounting to 1280 x 800 pixels) can cut out the image of a player from the background or differentiate between players in the background and foreground, enhancing game play handily. There’s also mention of logging in using facial recognition and using voice and body movements to play games “more intuitively.”

PS4 controller comes in the form of the DualShock 4 pad. Very much a classic design, the DualShock 4 nevertheless offers upgraded vibrations, enhanced motion sensors and a Vita-like touchpad on the front.

The PS4 release date is “Holiday 2013”. That’s the only detail Sony revealed at the launch and it’s unclear which territories it applies to. Certainly the U.S., almost certainly Japan.

PlayStation Move
Sony has confirmed that PlayStation Move will play a big part in the PS4 ecosystem. However, it has not yet been revealed whether the PS4 will launch alongside a new PS Eye camera and new Move controllers or whether the peripherals are staying the same with all the enhancements made console-side.

Sony has revealed that the PS4 will launch with the ability to stream games directly to your PS Vita. In exactly the same way as the Wii U allows you to switch off your TV and continue playing on the tablet controller, the PS4 will wirelessly send your games to the Vita.

There will be similar synergy between “all Sony devices” which means Xperia handsets and tablets, Bravia TVs and BD players.

Sony hinted that there will be more announcements in this area, too.

Pricing, a launch date and the console’s physical design, along with a firm line-up of launch games are expected to emerge at the E3 Show in June.