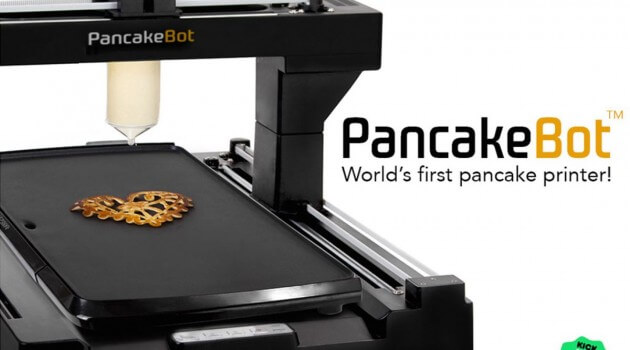 Thanks to a new 3D printer, it’s possible to create dinosaur- and Eiffel Tower-shaped pancakes without needing an art degree. Called the PancakeBot, the device can transform nearly any image into a fluffy breakfast favorite. Designer Miguel Valenzuela tells Fast Company that he developed the machine at the request of his three-year-old daughter, and he has now launched a Kickstarter to produce the gadget.

According to the project’s Kickstarter page, users can upload a file of any image to the machine. They can then trace the image, giving PancakeBot a set of digital patterns to follow. Then, the printer squirts the user’s pancake batter of choice directly onto a griddle, following the instructions from the image file. The griddle’s low heat settings keep the pancakes from burning. The PancakeBot can print an endless range of images including a “favorite piece of art or character, a child’s drawing, a product image or your company or team logo.”

So far, the Kickstarter for the project has been incredibly successful. With 28 days left to go, PancakeBot has already raised $95,795 of its $50,000 goal. The ability to make Yoda pancakes for breakfast on the daily will cost you $179 dollars.