Samsung has unveiled a smartwatch that works as an accessory to its market-leading Galaxy smartphones, with a small screen offering basic functions such as photos, hands-free calls and instant messaging. 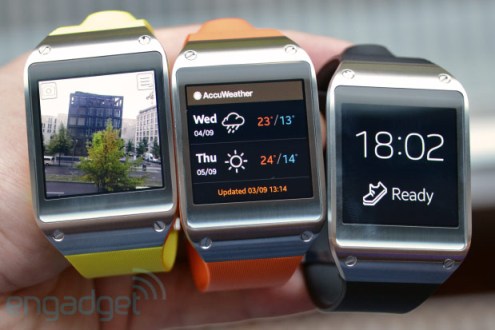 The Gear will ship with a 1.63-inch Super AMOLED panel with a resolution of 320 x 320. That strap-mounted camera, for its part, is designed to capture low-res shots and 10-second 720p videos, and includes a 1.9-megapixel BSI sensor and an auto-focus lens. The device is powered by an 800MHz processor and a 315 mAh non-removable cell, which Samsung reps say should provide up to a day of “regular” use. There are two built-in mics (with noise cancellation support), a speaker, Bluetooth 4.0, an accelerometer and gyroscope, 4GB of storage and 512MB of RAM.

There will be a total of 70 partner programs pre-loaded on the Gear at launch, including sharing apps like Evernote and Path, fitness companions like RunKeeper and MyFitnessPal, and a handful of other offerings, such as TripIt, Line, Vivino and even eBay. At launch, the device will only work with the Note 3 and Note 10.1, though some Galaxy S4 owners may be able to take advantage soon, after that device scores an update to Android 4.3. Assuming your handset is compatible, the Gear will serve as a companion device, enabling access to features like S Voice, Find My Device, a pedometer and third-party additions including those outlined above.

Samsung GALAXY Gear will be launched with the GALAXY Note 3 in more than 140 countries around the world starting from September 25.