January 14, 2013 1:25 pm ByMitfAdmin InSamsung
The Samsung Galaxy S II has been a widely recognized smartphone and the phone maker has just announced a slightly bumped up  version, the Galaxy S II Plus. Samsung said that the phone combines the performance of Galaxy S II,  together with nature-inspired user-interface and intuitive features that greatly boost its usability and functionality. 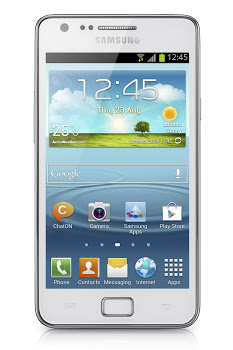 The Samsung Galaxy S II Plus boasts a 4.3” WVGA Super AMOLED Plus display which offers a generous viewing experience and enables photos captured with the powerful 8MP camera to be enjoyed in true clarity. It runs on Android 4.1.2 Jelly Bean and powered by an 1.2 GHz dual core processor.

The device also features Direct Call which enables users to automatically dial a call by taking the device to the ear, Smart Stay recognizes whether the user is looking at the screen to dim the screen accordingly; while Smart Alert lets users know about missed events or status updates just by picking up the phone.[more…]

In addition, the Galaxy S II Plus sports a range of additional features that boost performance and the overall experience. The Popup Video allows a video to play anywhere on the screen in a resizable pop-up window while simultaneously running other tasks, eliminating the need to close and restart videos when checking new emails or surfing the Web. S Voice lets users control the phone using their voice; and Voice Unlock lets users unlock the phone using their own voice.