One Max VS Galaxy Note 3 VS Xperia Z Ultra

One Max VS Galaxy Note 3 VS Xperia Z Ultra

HTC has finally announced its first phablet, the HTC One Max which will be released in various world regions soon. The Taiwan manufacturer will be soon joining the ever-growing phablet competition against devices such as the Sony Xperia Z Ultra and the Samsung Galaxy Note 3.

Which is your favorite among these three? 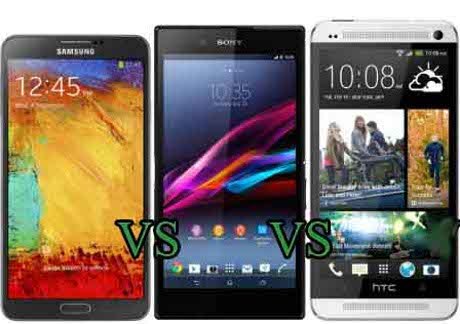 Camera Set-up
The HTC One Max features the impressive 4-megapixel UltraPixel rear camera inherited from the HTC One. This camera has autofocus and LED flash and benefits from features such as HTC Zoe with Sequence Shots, Always Smile and more. It also has a 2.1-megapixel front-facing camera and both cameras are capable of Full HD video capture.

Battery
In term of battery, the HTC One Max leads the other two with a 3300 mAh battery. The Galaxy Note 3 has a 3200mAh battery while the Xperia Z features the lowest battery capacity, 3050 mAh.

Operating System
These phones all run the Android operating system. The One Max and Galaxy Note 3 both run the latest Android 4.3 Jelly Bean OS with the One Max skinned with HTC’s Sense 5.5 UI while the Note 3 is overlaid with Samsung’s TouchWiz. The Xperia Z Ultra runs the slightly older Android 4.2 OS skinned with Sony’s UI.

Special properties
The HTC One Max comes with a notable fingerprint sensor, the Xperia Z Ultra is dust and water-resistant, and the Galaxy Note 3 has the use of the S-Pen stylus.

Also include the design in your consideration, which phablet is your favourite?