July 24, 2013 5:21 pm ByMitfAdmin InNokia
Nokia has just announced the Lumia 625, a budget Windows Phone with the largest display the company has ever put in a smartphone. It’s a 4.7-inch WVGA (480 x 800) panel with 201ppi, however, which makes it one of the least dense displays 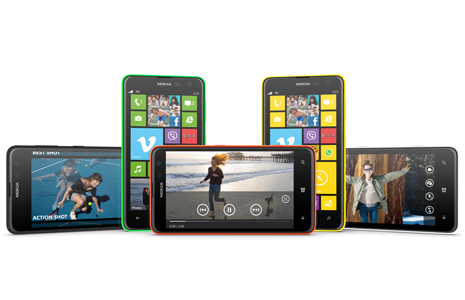 The Lumia 625 features a 1.2GHz Snapdragon S4 processor, 512MB of RAM, 8GB of MicroSD-expandable storage, LTE connectivity, a 5-megapixel main camera, a VGA front-facing camera, and a 2,000mAh battery. The inclusion of LTE is a selling point for Nokia, as this is its cheapest 4G handset, priced at £200 / €220 before taxes and subsidies.

Available in orange, yellow, bright green, white and black, the layered polycarbonate on the changeable shells gives the surface of the Lumia 625 a translucent quality. Nokia claims that it was “designed to still feel human, tactile and comfortable.[more…]

The phone will launch in Q3 across Europe, Africa, Latin America, and parts of Asia (including China and India), and the release date for the UK would be in September. Nokia hasn’t confirmed its plans for a North American release yet.