TCL Communications, the manufacturer of Alcatel One Touch branded smartphone has partnered with Marvel to be the official smartphone supplier for the third film in the franchise, which stars Rober Downey Jr., Gwynth Paltrow, Guy Pearce and Ben Kingsley. 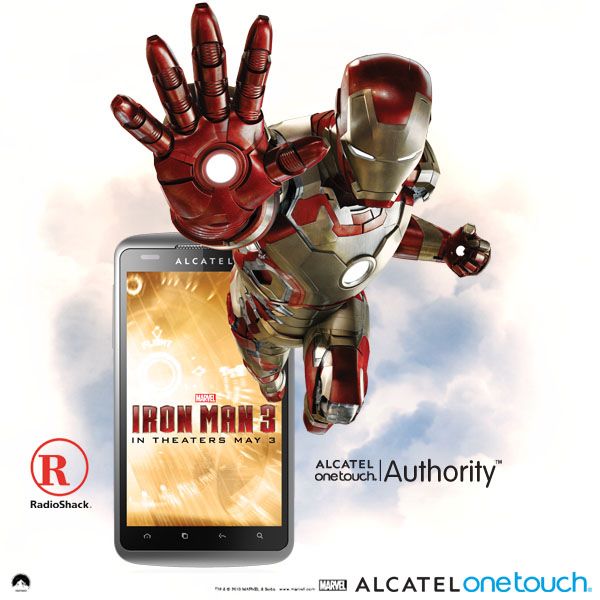 Commenting on the partnership, Dan Dery, chief marketing officer of Alcatel One Touch, said: “Being part of the Iron Man phenomena is a great thrill for us all at Alcatel One Touch. We are big fans of the franchise and are honored to be involved. The One Touch Idol is one of our most stylish handsets and now a genuine film star.”

The Alcatel One Touch Idol which was first seen at CES 2013 will be featured in the film.

The Alcatel One Touch Idol is a 4.7-inch Android smartphone which weighs at 110g and is extremely thin at just 7.9mm. With a brushed aluminium finish, the smartphone has a 4.7-inch IPS LCD capacitive touchscreen with a screen resolution of 540 x 960p and also the anti-fingerprint coating. It packs a 1GHz dual-core processor and 8-megapixel rear-facing camera.

The device is preloaded with Android 4.1 Jelly Bean, powered by an 1800mAh Li-Ion battery and offers 4GB of internal memory, expandable using microSD cards of up to 32GB. For connectivity, the Alcatel One Touch Idol provides Wi-Fi and Bluetooth 4.0. However, it doesn’t support 4G LTE.

The film Iron Man 3 will be shown in cinema from 26th April onwards. Try to spot the phone while you are watching the film!