It is the second day of CES 2014 and hundreds of new amazing technology are being showcased at Las Vegas. Intel captured the attention with its latest invention of Dual OS Computer. The company confirmed that Intel processors will power computers that can switch between Windows and Android with the press of a button, just like the Asus Transformer Book Duet. 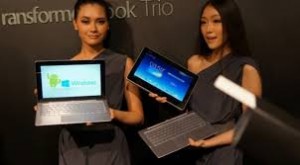 Intel demonstrated the technology on a laptop during the company’s press conference, right after introducing “Intel Device Protection Technology,” an idea that should help Intel-based Android devices meet corporate standards for enterprise security. However, Intel isn’t the only company pursuing Windows and Android in the same device here at CES.

AMD announced a partnership with BlueStacks to run full screen and windowed Android apps within Windows itself, with the help of an ARM processor core inside new AMD chips that can run some Android code natively. That sounds more like the Samsung Ativ Q‘s combination of Windows and Android back in June — though that technology was branded “Dual OS” rather than identifying itself as a BlueStacks solution.  Here’s a demo on Asus Transformer Duet.