Blackberry Z10 was launched in Malaysia

Blackberry Z10 was launched in Malaysia

After nearly one month of its international launch, the BlackBerry Z10 is finally here in Malaysia. The Z10 was officially launched in an event held in JW Mariott, Kuala Lumpur. The smartphone is priced at RM2,188 and will be available in two colors, Black and White. 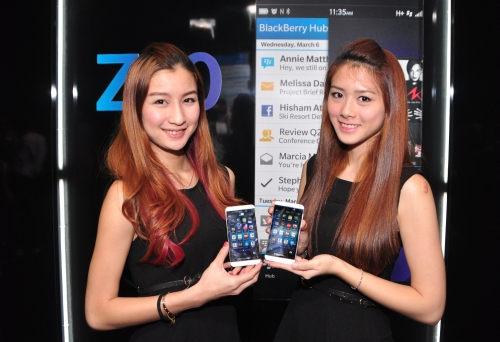 The BlackBerry Z10, which is an all-touch smartphone powered by the BlackBerry 10 operating system. It has a  4.2-inch, 1280 x 768 screen and powered by a Qualcomm Snapdragon S4 dual-core 1.5GHz processor paired with 2GB of RAM. It also features 2GB of RAM, 16GB of flash storage, which is expandable via microSD, backside-illuminated (BSI) 8MP rear camera capable of 1080p video recording, and the Time Shift feature. It also comes with a 2MP front-facing camera perfect for BBM video calling. For connectivity, the device features   NFC, WiFi, Bluetooth, microUSB and microHDMI ports.[more…]

The Z10 will be available in our local telcos. Maxis is going to start selling the device on March 9 while Celcom and Digi will only have the device in store on April 8, 2013. In addition, Blackberry Malaysia is also offering a “trade up” program, where Blackberry users can upgrade to the Z10 by trade in their existing BlackBerry smartphones. The trade up program will be limited to 3000 units only and subject to terms and conditions below: